First snow of the season.

On the first day of snow we got…over 12″. And it kept coming down. I took my car out to the road, so I don’t have to get stuck in the morning. Alice and I hooked up the plow to the Yamaha and promptly got stuck not even half way down he driveway. That was about 3pm. Of course we should have started plowing sooner, but we never thought it would get that bad that fast. Denial is a powerful thing.

By this time Frank came home. He didn’t even brave the driveway and walked to the house, dress shoes and all. He plunged right into the heat of things and pulled the Yamaha out. I plowed the driveway, which, by the way, about 1/4 of a mile long.

I brought my car back to the house.  After all, the snow stopped, the wind was not too bad to create drifts, I should be able to get out in the morning…I was wrong. In the morning it looked like this 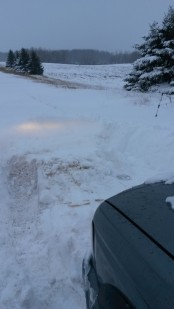 . Husband got the VG Rover succesfully stuck right in the middle of the driveway and Yamaha decided to have a flat tire. He fixed the tire and pulled the VG Rover out  with the help of the Kitt-Tan Rover. Then we got into the heat of the battle.

We were digging and plowing from 6 to 1030 in the morning, after which I finally made it to work and Frank was able to stay and work from home. First battle with the snow was won! But we see a new snow thower looming on the horizon. Yamaha alone just won’t be able to do it.

Love playing house ;)
View all posts by Tat →
This entry was posted in Uncategorized and tagged First snow, Winter in Minnesota, Yamaha Grizzly 450. Bookmark the permalink.